Skip to navigation
COMPASSIONATE COUNSEL ON YOUR SIDE REACH OUT NOW

Welcome to Our Special Cannabis and Workers' Comp Newsletter!

My office has filed a test case in Lancaster seeking to have an injured worker reimbursed for their out-of-pocket MMJ costs. This worker suffers from intractable pain due to failed cervical surgery. The Claimant was severely addicted to opiates and was suffering from deleterious health effects from the use of opiates. The worker is now off all opiates and an example of how beneficial MMJ can be as a treatment, at a fraction of the cost for the carrier. This is, to my knowledge, the first case of its kind in PA,

I have further confirmed that at least one small PA-based carrier is reimbursing injured workers for their MMJ provided they have come off opiates! In addition, I am aware of several anecdotal stories of workers being reimbursed for their MMJ costs across the state.

For the first time, a Utilization Review Determination found the use of medical marijuana to be reasonable and necessary for an injured worker. A Petition to Review has been filed by the carrier and is pending in Northeastern PA.

In New Jersey, Bill A4505 has been introduced by Assemblyman John J. Burzichelli requiring workers' compensation and PIP automobile carriers to provide coverage for the costs associated with the use of medical marijuana. The injured worker will be required to show that (1) they are a qualified medical marijuana patient in NJ; and (2) at least one other medical treatment has been attempted and found to be unsuccessful in treating the patient's "debilitating medical condition that qualified the patient for the medical use of marijuana." 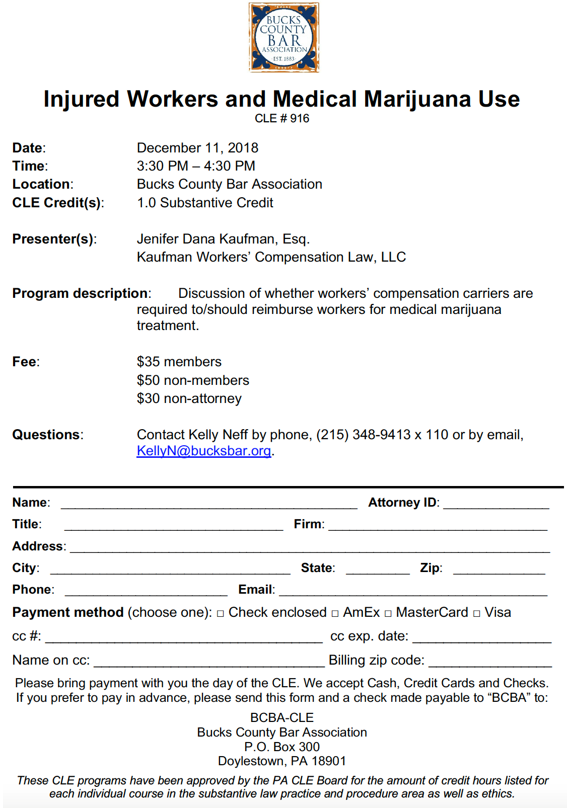